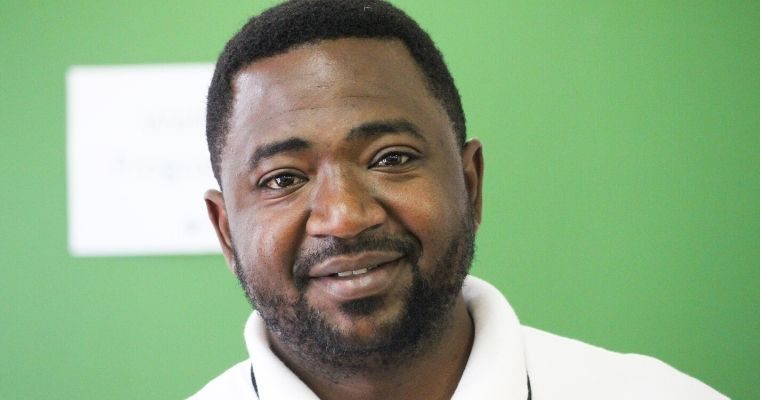 Once Abel completes his studies, he will return home to Zambia and plans to continue the kind of advocacy work he has been doing at Scalabrini there. Read more about Able’s experience below.

“I have visited South Africa on several occasions, but the last 12 months have been the longest that I have remained in the country. I really love Cape Town as a city, especially the people and the fish and chips. This has been a great experience and opportunity to learn about the country’s history and cultural diversities. The Cape Town experience for me is unique in the sense that I have felt at home, partly because my home is only 5 hours away and also because of the cultural similarities between Zambia and South Africa.

I am a legal practitioner and recently completed my LLM in Public International Law. I specialised in the protection of human rights of vulnerable persons in society, particularly children, women and refugees.

“While South Africa may have some of the most progressive laws and policies in relation to the reception of refugees and asylum seekers, the practise on the ground is very different. I have been able to deal with real life problems and form part of the solution."

Scalabrini has a mandate that aligns to my personal interests and career path. I’m currently an advocacy intake officer and part of my job is giving advice to asylum seekers on the administrative procedures of applying for asylum in South Africa. The interesting part of my job is that it exposes me to a myriad of issues faced by refugees and asylum seekers. It is fulfilling to be a part of the solution.

I have been exposed to a variance between law and practise, especially in the way government departments and service providers operate in regards to service delivery to refugees and asylum seekers. I have also been lucky to deal with a diverse set of individuals from different backgrounds and in the process I have harnessed being patient, attentive and compassionate.

Through daily interactions with clients, I have learnt to draw a line between law and practise. While South Africa may have some of the most progressive laws and policies in relation to the reception of refugees and asylum seekers, the practise on the ground is very different. I have been able to deal with real life problems and form part of the solution.

What stands out at Scalabrini is the work culture and the spirit of togetherness amongst the staff. There is great coordination between the various programmes and the fact that being an advocacy intern, I was required to have an understanding of all the various programmes that Scalabrini is involved in. This enabled me to go the extra mile and give advice to clients who may be in need of employment access, English lessons etc.

My high moment at Scalabrini was when I was tasked to draft an appeal for a 14 year old who was abandoned by her father at the age of six and has been in foster care ever since. Her asylum claim was rejected as manifestly unfounded. Being tasked with such a responsibility was a great moment for me, but also gave me an insight as to what challenges individuals seeking asylum face within the system. This experience was also a low for me because my client was at risk of being stateless if her claim for asylum was not considered on its merits, which would in turn affect her education and ultimately her future.

My future plans are to fully engage in similar work as what Scalabrini is involved in. I intend to return to Zambia after my studies to practise law, but also to do pro bono work; helping refugees and asylum seekers in detention in Zambia. I would also love to set up a refugee advocacy NGO with the aim of protecting refugee rights and engaging government in law and policy overhaul – especially as Zambia promotes encampment of refugees. I would love to see a shift in policy to allow full and immediate integration of refugees and asylum seekers in South Africa."