Isaac: On the Path to Emergency Medicine with the Employment Access Programme | Scalabrini 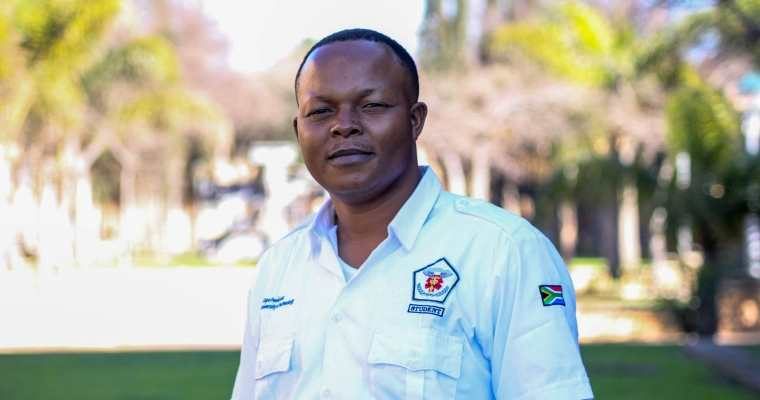 Isaac: On the Path to Emergency Medicine with the Employment Access Programme

Isaac was 25 years old when he left his home, the Democratic Republic of Congo (DRC) and made the journey to South Africa, alone. After spending time in Zambia and Zimbabwe, he arrived in Cape Town where he is now pursuing his dream of getting a Bachelor’s Degree in Emergency Care from the Cape Peninsula University of Technology. Isaac reflects on how the Scalabrini Employment Access Programme fitted in with his journey.

Back home in DRC, Isaac had completed nursing school and was working for an NGO. He was also involved in politics, but was aware of the fact that when you speak the truth in a country facing political instability, you can quickly become a target. Very sadly, an eruption of conflict saw Isaac losing members of his family. Others fled in different directions. He made the decision to leave his home, with no idea of where he would end up.

Isaac describes his arrival in South Africa as a difficult time. “It was a very difficult situation. My first time in Cape Town was lonely, arriving in a place where you don’t know anyone, with no family. I spoke no English. It was very, very tough, but because I was determined I kept going until today.”

Through the Congolese community, Isaac found the Scalabrini Centre and the right programme to guide him in the direction he was wanting to go. He joined the Employment Access Programme where it was discovered that the South African Nursing Council did not recognise his qualifications, so his studying venture in South Africa began.

“I applied at the Cape Peninsula University of Technology (CPUT) six times. I applied, they rejected, I applied, they rejected, but I kept on trying. In the meantime I was doing extra courses, like first aid, nursing courses, basic life support. I was doing that in order to meet the requirements of the university.” In 2017, Isaac met the requirements and was accepted into both Radiology and Emergency Services. He chose Emergency Services.

It has not been the smoothest journey for Isaac. CPUT does not provide bursaries for foreign students, which means that Isaac works night shifts at the Cape Town Mediclinic trauma centre and studies during the day. This does not leave him with much time, and he has had to re-do a few subjects.

While Isaac is focused on graduating, he remains aware of the hardship facing his community. “I don’t just want to be focused on myself. So far I have tried hard, and I am somewhere, but I’m also thinking about other people who are on the same journey. If I can graduate it will be a plus for me, a plus for the Congolese community and a plus for other foreign communities in general as I will be better equipped to help them. When we help more people, we create the positive cycle and reduce suffering in our communities.”

If you are able to help in any way, Isaac has a BackABuddy account where people can donate money to help pay for his studies. The donations will go straight to the account of CPUT. The link is provided below.