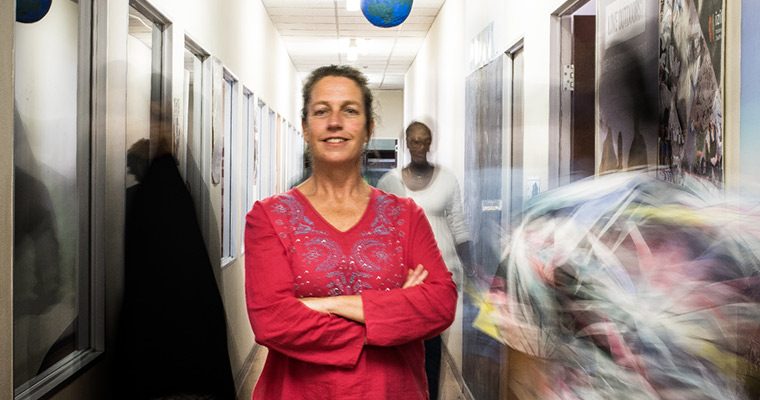 For the past eleven years, Miranda Madikane has been the director of The Scalabrini Centre of Cape Town – a bustling NGO in the heart of Cape Town offering specialized services to migrants and refugees, who come from all over the African continent and Asia. She reflects on her position as director, and what the changes she has seen in Southern African migration.

1. You have a demanding job, being the director of such a busy, multi programme organization. What is your favorite aspect of your work?
Realizing how much we are actually managing to help people. Sometimes we help people in a really small way, and sometimes we manage to change people’s lives in a really significant way that’s really useful. There were times, looking back, where I remember thinking that helping a person is probably the most complicated thing that you can do, and the fact that we have the systems and the programs in place that support us in helping such high numbers of people on a daily basis is amazing. The amount of thanks and gratitude that we get from our clients makes me know that our work is valuable.

2. What is the most challenging aspect of your position?
I think it’s the crazy pressure, and the fact that no two days are alike. In some ways, you never know what you’re going to be smacked with. We’re an extremely responsive organization, so that means we are really hit by external events, which can be crazy because it adds a huge amount of pressure to daily work. On the other side, I’ve got the joy of being challenged on a spiritual level, on an ethics level, on an emotional level, on an intellectual level, on a physical level, so I think that’s really fulfilling. I often say to my team that we work as hard as any corporate, that we are under as much pressure as the corporate, but our goal isn’t profit, it’s change.

3. You work with issues of migration every day. What makes you so passionate about this topic?
Having now worked for so many years with migrants and refugees and asylum seekers, and having a legal framework that is one of the best in the world for protection, seeing how that plays out to support our clients when implemented properly is incredible. It feels so nice to be backed by a framework that supports the dignity and freedom and healing of clients in a way that allows them to control their own destinies.
It’s so important for us to have that legal framework, though, one that offers a route to neighboring countries and access to economic opportunities of the country. Such incredible productivity comes from the economic migrant. Their aspirations and their dreams and their energies are so positive for the country, plus, they bring new perspective! They bring new cultures, new songs, new hairstyles. These may be nuanced and perhaps not so tangible contributions, but they add to the flow. So I think migration, properly managed, can be so positive in our context and I feel like it’s wasted.

4. From your perspective, has migration to South Africa changed in nature over the last few years? If so, what kind of changes are we witnessing?
There’s been a shift from the management of migration being designed to support the vulnerable and those fleeing persecution. The government was not prepared to accept economic migrants into the country, and that’s what happened. There wasn’t a parallel system for immigration vs. protection, and as a result, people started using the refugee system to gain access to work permits. So the consequence of that was that home affairs was completely overwhelmed by numbers, and could never, ever manage individual status determinations for each and every single person who came. But instead of then opening up a system that allowed for economic migrants or migrants of aspiration, the government has chosen to tighten and reduce the protection space for all refugees and asylum seekers. And the sadness there is that those who are in real need of protection are finding it more and more difficult to access.

“We’re definitely seeing more women, and I think that’s in line with what’s happening on a macro level – more women migrating for economic reasons, and for protection." 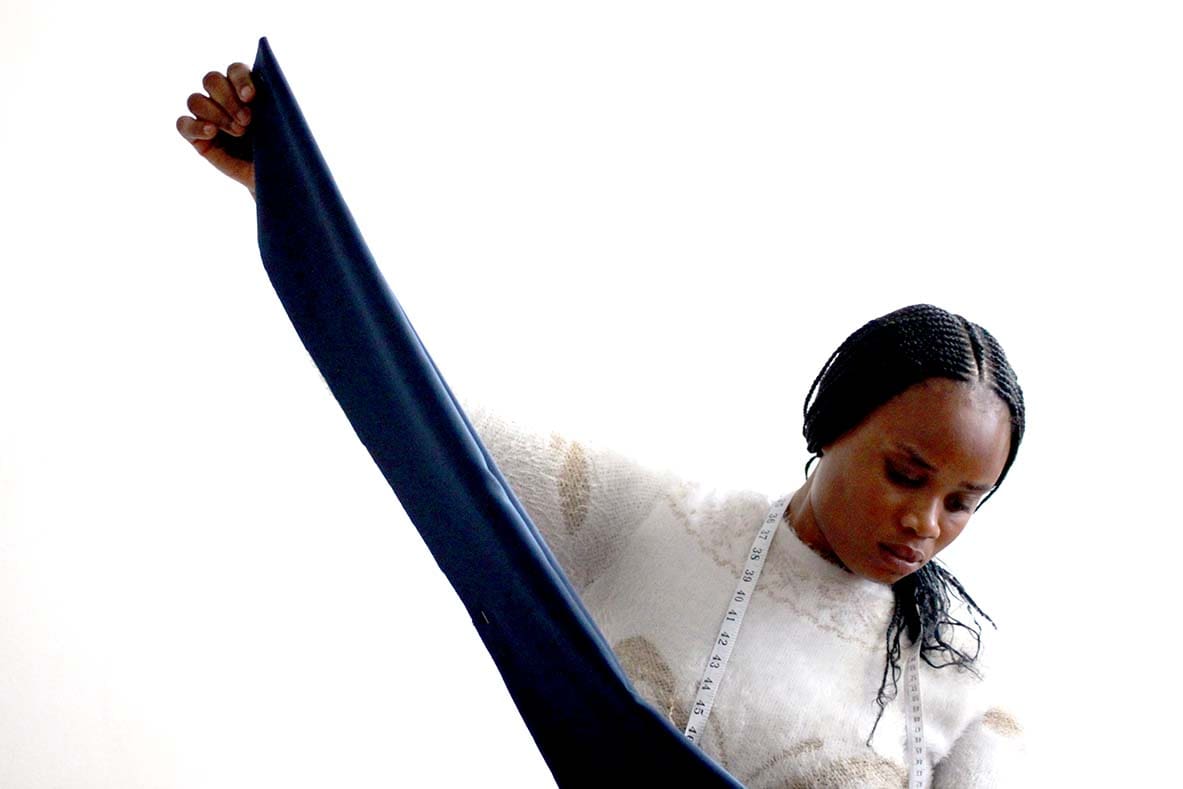 5. What kind of changes in client profile have we seen in the last few years?

We’re definitely seeing more women, and I think that’s in line with what’s happening on a macro level – more women migrating for economic reasons, and for protection. There’s also a big difference, of course, in access to documentation; we are supporting higher numbers of undocumented individuals. In 2012, 1% of the entire organization’s clients were undocumented. Now, it’s more like 24%. So it’s a massive shift, which of course reflects the reality of the closing of the space, the protection of the space.

6. How does Scalabrini react to these kinds of changes?

The increase in women saw the rise of the women’s platform, and it’s affected our strategic direction. I mean, we are very conscious of the rise of the undocumented, and that is something we constantly advocate around. As an organization we have to be extremely careful. We’re allowed to offer humanitarian aid, so you’ll see that in the employment access programme, you have to be documented to gain access to services. Otherwise it would be aiding and abetting an irregular migrant in accessing work. Our welfare desk is allowed to assist undocumented, because they are offering humanitarian aid. The advocacy programme speaks to undocumented, and if they have claim, gives them due process to approach an RRO. Our undocumented clients who have no claim, though, are normally told that the only way to legalize their stay in South Africa is to return to their home country and to make application in that way.

7. Has the way that the South African government approaches migration changed over the last few years?
The South African government’s method of dealing with migration has shifted from a social to a security approach. South Africa sprang from a place where many of us had been refugees in exile from the apartheid regime, and it was based on the knowledge of what that meant to be in exile and to be running from your state that this beautiful refugee act was formed.

I think the issue arose from the lack of resources and structure to support high numbers of refugee and asylum seekers coming into the system. The government’s knee-jerk reaction was to blame the migrant, so the asylum seeker and the refugee were demonized, instead of actually seeing that their failure is in lack of structure.

8. Looking to the future, how do you think migration to South Africa might change in the coming years? Are there things to be concerned about, and things to be excited about?
One of the big positive factors in the white papers is the introduction of the South African visa regime, which allows migrants from our region access to low-skilled work permits, cross-border informal trade permits, and small business enterprise permits. So that’s really exciting because it means that people can come in not on a pretense, but come in for the reason that they’re here and it’ll make it slightly easier for them. It also means that the circular migration will be much easier to achieve, and I think therefore the joining of South Africa to the rest of Africa will become much realer. And then, who knows? Maybe South Africans will say, “hey, maybe there’s opportunity for me in Kinshasa,” and you’ll see South Africans looking more broadly at opportunities and gaps in the market that are definitely there in the rest of the region.

The negatives are obviously the move to the border, the closure of the RRO’s [Refugee Reception Offices], the refusal of Home Affairs to obey court orders, the blaming of the refugee and asylum seeker for their management. I mean essentially, it is their [Home Affairs’] duty to control the decision-making of the RSDO’s [Refugee Status Determination Officer] and while I have sympathy for the numbers, I don’t believe that there’s any sincerity in their attempt to properly manage it. Those are all negatives, and what we see with, what they call the securitization approach or the externalization approach, is the criminalization of the migrant. At the moment, it’s a criminal offense to assist an irregular migrant but not a criminal offense to be an irregular migrant (it’s an administrative offense) but I think with this new approach, that will change. So you’ve got your individual person who decided to dream a dream becoming a criminal.

9. Migration is such a hot topic in South Africa. Is there a specific mind-shift that you think would be beneficial to our future as a country?
Right now, the government is looking at what’s happening in the rest of the world and tried to align themselves with a lot of first-world countries where there is a growth in populism, where migration is used for fear, where security is touted as the way to properly manage migration, where a lot of externalization is happening; you can see in Australia, and now in Europe, people are being held out of the borders of the places where they’re seeking asylum. So, that’s essentially what South Africa has been mirroring since about 2011-2012, and now it’s reaching its pinnacle with regulations for amendment coming in and the white papers clearly stating that they’re hoping to externalize.

I feel that the security of the nation lies in data that has integrity. So if you know what the movement of people is, and you know where they come from, and why they’re here, that, for me, offers protection. Not trying to build a wall that stops migration from coming through, because migration is like water. And you can’t really stop the flow of water, so you won’t stop the flow of migrants. With migration, we’re talking about the movement of people, but the migrant is a person. 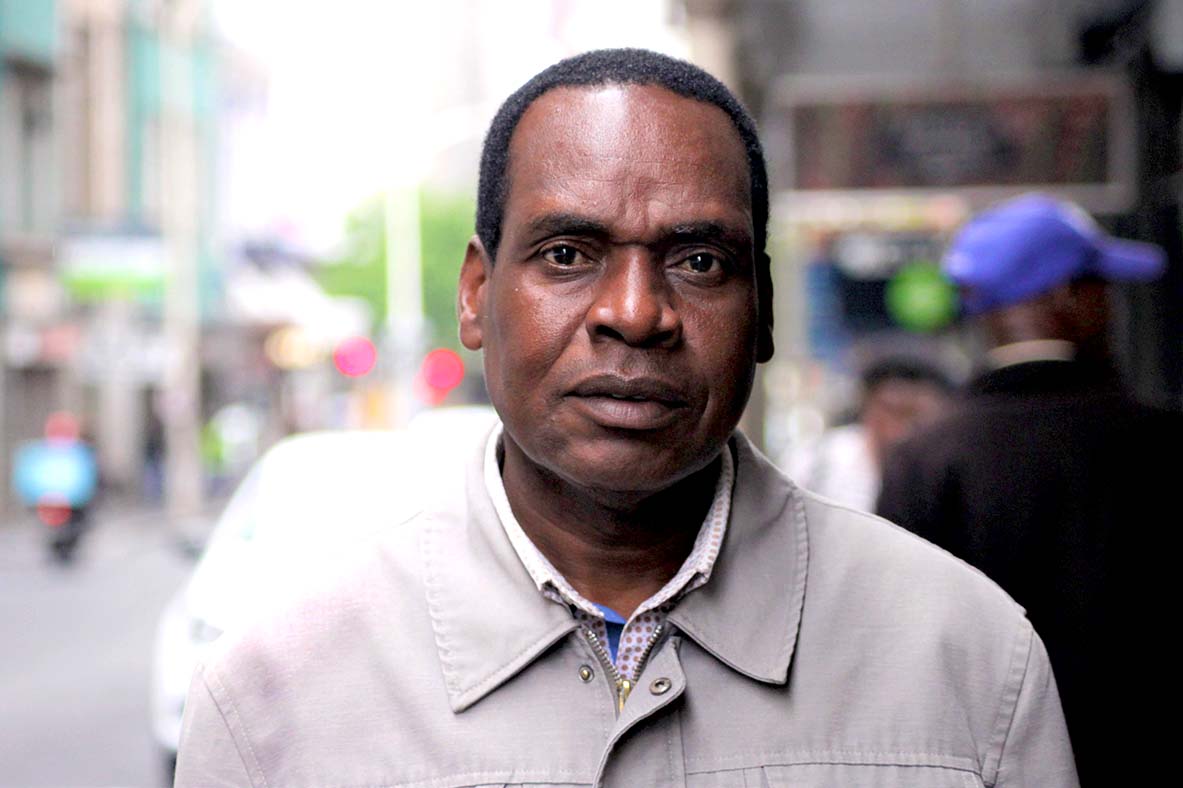 “With migration, we’re talking about the movement of people, but the migrant is a person."